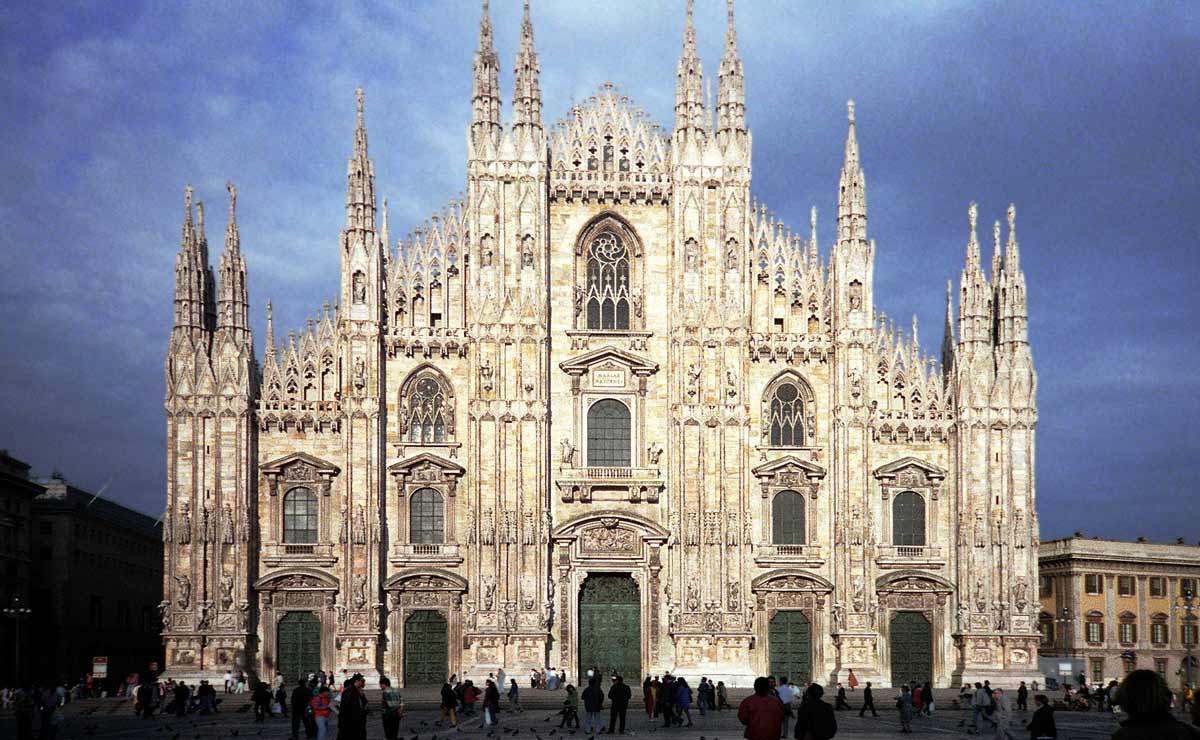 The construction of the Milan Cathedral began in 1386 on the area where the ancient basilicas of Santa Tecla and Santa Maria Maggiore stand, which was demolished in later times. Dedicated to Maria Nascente, it was commissioned by Gian Galeazzo Visconti, with a dual purpose.
Renew the cult sites in the heart of Milan with an impressive building plan and celebrate the Visconti rule and its ambitious expansionist policy.

Milan Cathedral is the largest and most complex Gothic building in Italy, made of pinkish white marble from the Candoglia quarries in Val D’Ossola. It is 157 meters long and covers an area of 11,700 square meters. The main spire reaches a height of 108.5 meters. On the top of the latter is placed in October 1774 the golden statue of the Madonnina (4.16 meters high), by the sculptor Giuseppe Perego.
The construction work continued for five centuries and during this period architects, sculptors, artists and workers, both local and from all over Europe, took turns in the Fabbrica del Duomo. The result of their work is a unique architecture, a fusion between the Gothic style of the Alps and the Lombard tradition.

Impressive is the abundance of the decoration: spiers, pinnacles, an immense patrimony of statues (about 3,400, of which 1,100 inside and 2,300 outside), sculptures in frames and windows, decorations.

The complexity of realization is such that the last part completed is precisely the façade in 1813. Before this date the facade of Santa Maria Maggiore represents the temporary front of the cathedral.

The bronze doors date back to different times of the '900. The central door is carved in 1906 by Ludovico Pogliaghi with Gothic-floral reliefs, the theme is "stories from the life of Mary".

The interior has a Latin cross plan, a deep choir and a polygonal apse. The style is mainly late-Gothic with the addition of classical elements dating back to the Counter-Reformation period, when the presbytery, the main altar, the pulpits and some side altars take shape.

The Crypt houses the chapel of St. Carlo Borromeo, designed by Francesco Maria Ricchino in 1606, with the rock crystal urn that encloses the body of the saint in pontifical dress.

From the terraces, which can be accessed by lift or stairs, you can admire the whole city of Milan.